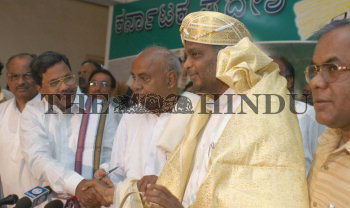 Caption : Srinivas PRASAD, who quit the NDA Government and the Janata Dal (U), to join the Janata Dal (Secular), being greeted by the State party president, Siddaramaiah (second from left), and party president, H.D. Devegowda, at the party office in Bangalore, on March 06, 2004. Former Minister, Perikal Mallappa, and party leader, P.G.R.Sindha,(right) are also seen. Mr PRASAD had won from Chamarajanagar for four terms between 1980 and 1991 as Congress nominee and switched over to the Samata party, that was merged into JD(U) in the 1999 elections. Photo: K. Gopinathan Photo: K. Gopinathan