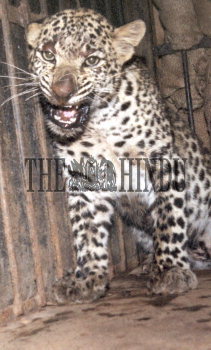 Caption : A leopard which strayed into a poultry farm near Visakhapatnam, created havoc by killing more than 100 birds. It was captured by WILDlife authorities and later on released into the Narasipatnam forest area in the district. Photo: C.V. Subrahmanyam, 05-03-2004