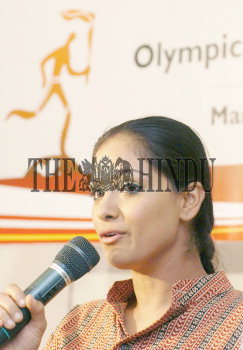 Caption : Actress Simran, brand ambassador for Fanta, announcing her participation in the Olympic torch relay as one of the escort runners. The run is to take place on June 10, 2004, in New Delhi. Coca Cola India announced the Olympic torch bearer nomination programme for selection of three torch bearers in Chennai city on March 4, 2004. Coca Cola will select 42 torch bearers and 7 escort runners from across India through the nomination programme. Photo: Bijoy Ghosh