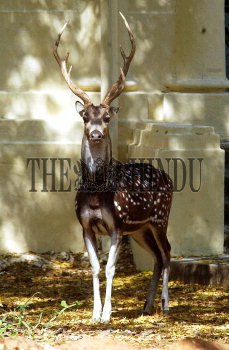 Caption : The annual census of SPOTTED DEER at the Guindy National Park in Chennai was conducted by the Tamil Nadu Forest Department on February 29, 2004. The census found the SPOTTED DEER population to be 2, 650 at the park and adjoining areas that include the IIT campus in Madras and the Raj Bhavan campus. Photo: N. Balaji