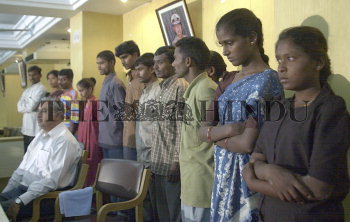 NAXALITES WHO SURRENDERED BEFORE

Caption : Thirteen naxalites of the People’s War (PW), including three girls, SURRENDERed before the DGP, S.R. Sukumara, in Hyderabad, on February 28, 2004. Maraboina Naresh (24), the local guerrilla squad (LGS) commander of Narsampet, in Warangal district, told reporters that the reason for this SURRENDER was the weakening of PW movement. Photo: H. Satish