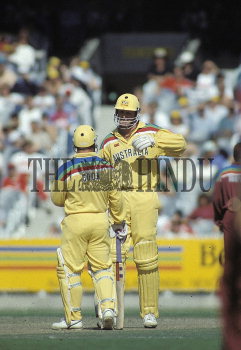 Caption : Australian batsmen Tom Moody and David Boon in a mid-wicket conference during a match between Australia and West Indies at MCG on March 18, 1992 in the Cricket World Cup 1992 held in Australia. Photo: V.V. Krishnan