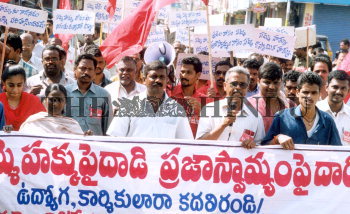 Caption : CITU activists taking out a rally in Vijayawada, on February 24, 2004, as part of the All India general strike called by the Trade Unions protesting against the withdrawal of the `right to strike'. Photo: Ch. Vijaya Bhaskar