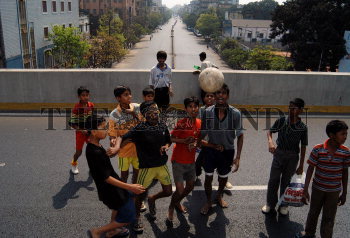 Caption : Children enjoy a game of soccer on top of an empty flyover during the 24-hour strike called by left trade unions, in Kolkata on February 24, 2004. The day-long strike called by the left-affiliated trade unions began today to protest against the Supreme Court order banning strikes by government employees. The strike seeks measures from the government to negate the impact of the Supreme Court's observation on the 'right to strike' and the anti-labour and privatisation policies of the Centre. Photo: Parth Sanyal