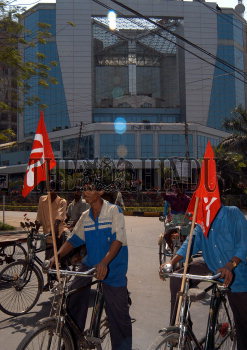 Caption : Cadres of CITU move around the ITcompanies to see whether they are closed during the 24-hours strike called by left trade unions in Kolkata, on February 24, 2004. Although IT had been declared as an essential service under the IT Act, CITU refused to give exemption to this category from the strike, forcing the IT sector to go on a holiday with heavy losses for the day. The left-affiliated trade unions had called for this strike to protest against the Supreme Court order banning strikes by government employees.The strike seeks measures from the government to negate the impact of the Supreme Court's observation on the 'right to strike' and the anti-labour and privatisation policies of the Centre. Photo: Parth Sanyal