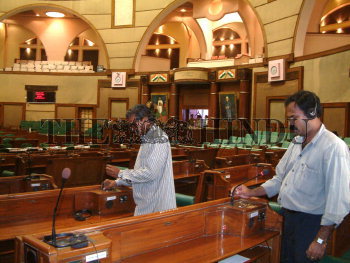 Caption : The technical employees check the mike in the Madhya Pradesh Assembly house in Bhopal, on February 22, 2004. The second session of the 12th Vidhan Sabha will begin on February 23rd with Governor Ramprakash Gupta's speech. Photo: A.M. Faruqui