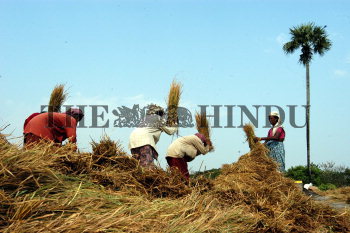 Caption : Workers threshing and winnowing the paddy at Kollankode in Palakkad district on February 22, 2004. Drought has brought down the production of rice in Kerala's Palakkad district, which produces 34 per cent of the State's total rice production. A production loss of 1,22,452 tonnes gas been reported from this district alone. Kerala's rice production at present is estimated at 7 lakh tonnes as against a demand of 28 lakh tonnes. For want of water 26,156 hectares of paddy field has been left idle in this district. Photo: K.K. Mustafah