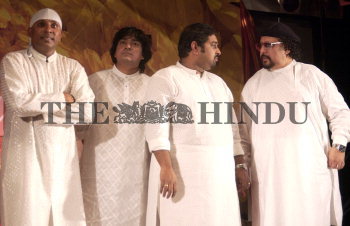 Caption : (LtoR) Sivamani, U. Shrinivas, Shankar Mahadevan and Louis King at the Music Academy, during the annual fund-raiser organised by Shakti Foundation in Chennai, on February 21, 2004. The annual show, Samrddhi, featuring U.Shrinivas,(mandolin), Shankar Mahadevan,(vocal), Sivamani,(percussion) and Louis King,(keyboard) presented soulful strains specially composed for the event. The show is to create greater awareness about the physically challenged and free them from social ostracism. Photo: R. Ragu