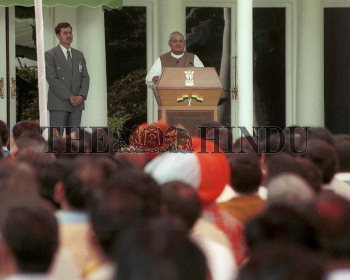 Caption : The Prime Minister, Atal Bihari Vajpayee, addressing an audience of Bharatiya Mazdoor Sangh members, at his residence in New Delhi, on February 21, 2004. They had gathered to thank the government for the merger of the 50 per cent of dearness allowance (DA) with basic pay for central government employees. Photo: Shanker Chakravarty