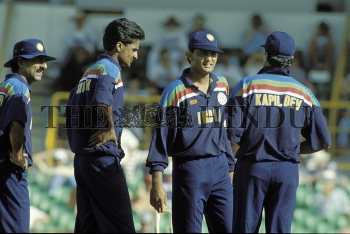 Caption : Indian players K. Srikkanth, Javagal Srinath and Kapil Dev with their captain Mohammed Azharuddin during a match against England at Perth on February 22, 1992 in the Cricket World Cup 1992 held in Australia. Photo: V.V. Krishnan