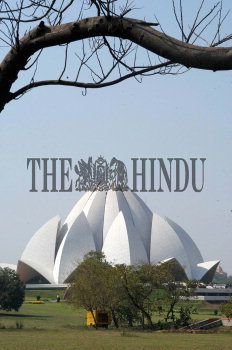 Caption : General view of the Bahai House, popularly known as the Lotus Temple, in New Delhi. Visualising brutal polarisation of religion, Bab, a Persian youth, laid the foundation of a new religion to embrace the entire human race, on May 23, 1844. Known the world over as Bahai, it comprises individuals from virtually every country, ethnic group, profession and social class. The Lotus Temple is a unique place of worship for Bahais. Constructed in December 1986, this man-made marvel is spread over 27 acres with 27 petal-shaped domes and nine pools. It was designed by noted Iranian architect Fariburz Sahba. Its main structure comprises concrete and dolomite stones from Alwar (Rajasthan), marble from Greece and white cement from Korea. This unique place of worship owes much of its elegance to the basic motif of the lotus (implying unity in diversity) aptly translated into reality by computer-aided designing. The central hemispherical prayer hall with a seating capacity of 1,300 is open only to those who believe in praying in silence. Neither rituals nor sermons are permitted in the sanctum sanctorum. Photo: S. Subramanium