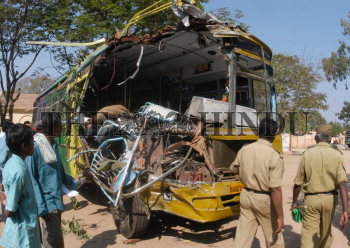 Caption : One of the mangled buses which was involved in a head-on COLLISION with another bus near Magadi in Bangalore, on February 19, 2004. Six persons were killed and at least 35 were injured in the COLLISION between two private buses. One of the buses was on its way to Magadi from Bangalore, while the other was bound for Bangalore. Photo: K. Gopinathan