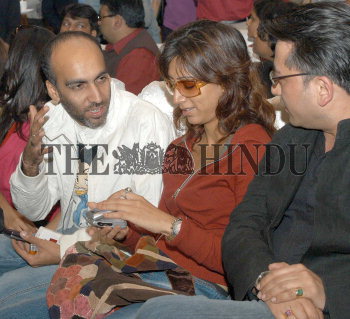 Caption : (From left) Fashion designers, Manish Arora, Malini Ramani, Sonam Dubal, at a press conference to announce the Lakme India Fashion Week 2004 in New Delhi on February 19, 2004. About 60 leading designers including Malini Ramani, Raghavendra Rathore, Rina Dhaka and Ritu Kumar would display their creations at the Lakme India Fashion Week to be held here from April 29. The participating designers would showcase their pret (ready-to-wear) and diffusion (a line between pret and couture) lines in ethnic, Indo-western and western categories at the seven-day event which would also include around 35 shows, seminars, workshops and symposiums. The theme for this year would be 'Join the Fashion movement', with Lakme as the title sponsor, and DHL, Liberty, Seagram and Hyundai, the co-sponsors. Photo: V.V. Krishnan