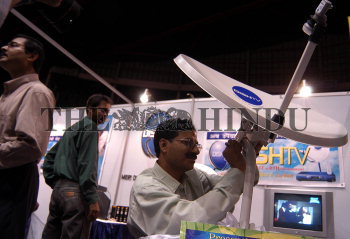 Caption : A man adjusting the dish antenna of the DTH cable television at a stall in the Cable TV Show 2004, in Kolkata on February 19, 2004. The cable TV was started in 1991 in India i.e., in the 13th year of its operations and free-for-all situation prevailed for the first five years. During the past 13 years, the connectivity has increased from a mere 1,000 homes in 1991, to 48 million cable homes at present. The total number of TV homes in India is estimated at 80 million including the terrestrial reach of Doordarshan. Photo: Parth Sanyal