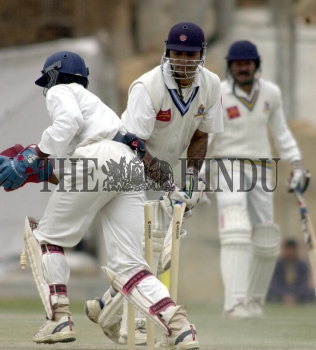 Caption : East zone captain Devang Gandhi, being stumped by M.S.K.Prasad off Sunil Joshi (not in pic) on the final day of the Duleep Trophy league match against South zone at the Dharamshala cricket stadium on February 17, 2004. Also seen is Utpal Chatterjee. Photo: R. V. Moorthy