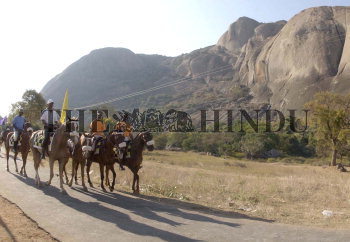 Caption : Participants of the Mysore safari at the Savandurga Magadi talluk on the concluding day on February 14, 2004. They set out from Srirangapatna a week ago to trace the battle route of Tipu Sultan. The event marked the conclusion of the safari which was organised by the Army Service Corps Centre and College and the Union and State Governments to highlight Karnataka's military and cultural heritage and promote tourism. Photo: V. Sreenivasa Murthy