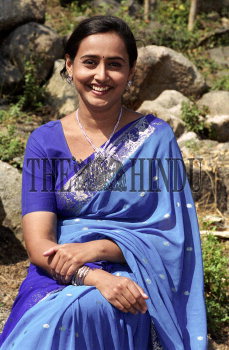 Caption : Anchor Anupama at work on the sets of 'Kya Scene Hai', telecast on Teja channel. She along with another anchor Sattana analyse films and showcase the howlers and gaffes from Telugu films. Anupama has ushered in a new style in telly anchoring. A hotel management graduate, the chirpy anchor made a mark with Kotha Cinema Guru on Gemini television. The show propelled by her vivacious presentation not only topped the chart of film shows but also had a high ranking on Telugu channels. Aata Kaavaalaa Paata Kaavaalaa is the other popular show in which she presents the top Telugu movie songs every week. This programme has Anupama going live to play the top of the week Telugu movie songs. Photo: K. Ramesh Babu 14-02-2004