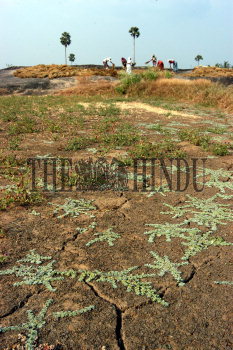 Caption : Drought in Kerala's Palakkad district has created fissures in the paddy fields. A scene from Kollengode in the district. The district which produces 34 per cent of the State's rice production is estimated to produce only around 50 per cent of its share this year. The area under paddy is on decline in the State for the past several years. Photo: K.K. Mustafah