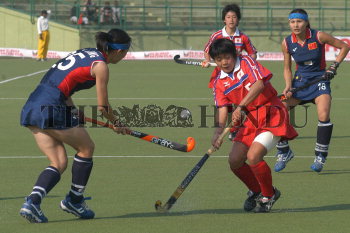 Caption : Japan's Sachimi Iwao,(5) being tackled by Chinese defender Zhang Anjie,(25) during the semifinal match between China and Japan in the fifth women's Asia Cup Hockey Tournament at the National stadium in New Delhi, on February 6, 2004. Photo: V. Sudershan