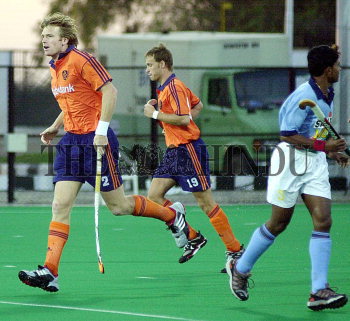 Caption : HYDERABAD, ANDHRA PRADESH, 07/02/2004: Bram Lomans, who scored Holland's first goal, in the first half of the second hockey Test match of the Naval Tata Memorial hockey series between India and Holland at the Swarnandhra complex at Gachibowli in Hyderabad on February 07, 2004. Photo: K. Ramesh Babu