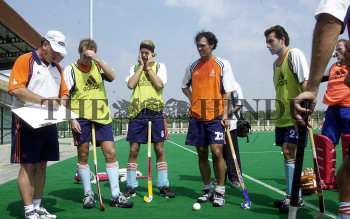 Caption : Former Australian internatiional and now coach of Holland team, Terry Walsh, jotting down some notes during the practice session on the eve of the first hockey test against India at the Gachibowli hockey complex in Hyderabad on February 4, 2004 .. Photo: K. Ramesh Babu.