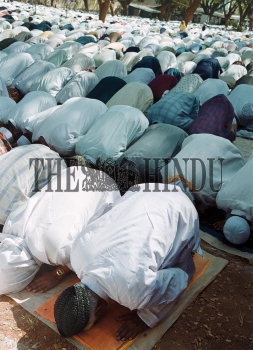 Caption : People at the Id prayer meeting in Bangalore on February 02, 2004. Bakrid, also known as the Feast of the Sacrifice, is one of the most important feasts on the Muslim calendar and nearly all work comes to a halt for the celebration. Bakrid commemorates the story from the Quran when God told Ibrahim to sacrifice his son as a test of his fealty. As Ibrahim raises the knife to carry out the command, God replaces the child with a sheep, which Ibrahim slaughters instead. In the Quran, Ibrahim is about to sacrifice his son Ishmael. Muslims throughout the world slaughter a cow, camel or sheep to mark the feast. Tradition dictates that a third of the meat go to the men who purchased the animal, a third to their families and a third to the poor. Photo: G.P. Sampath Kumar