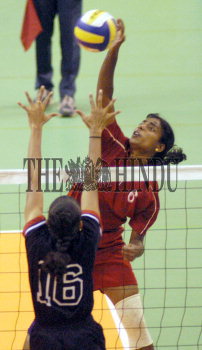 Caption : Vini Thomas of Southern Railway all set to spike the ball through the hands of Gisha Thomas of KSEB, during a match in the Nutrine Maha Lacto Super League of the National Super League Volleyball Championship for women at the Nehru indoor stadium in Chennai, on January 17, 2004. Photo: R. Raghu