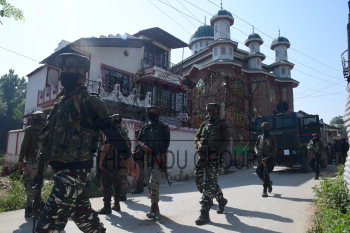 Caption : SRINAGAR, JAMMU & KASHMIR, 19/06/2020: Army jawans leave encounter site after killing of three militants in 30 hour long gunbattle at Meej area of Pampore Pulwama district south Kashmir on June 19, 2020. Eight militants including the two who had taken shelter in a mosque, have been killed in two separate operations that began on Thursday in south Kashmir. Photo: Nissar Ahmad