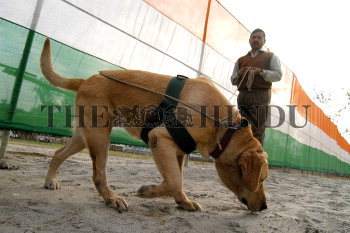 Caption : A sniffer dog, inspecting the parade ground at the 'Judge’s Field' on the eve of the Republic Day in Guwahati, on January 25, 2003. The entire State police force has been put on high alert following apprehension that the militants belonging to the United Liberation Front of Asom (ULFA) and the National Democratic Front of Boroland (NDFB) may try to create disturbance in the city, after receiving SETBACKS in the operations launched by the Royal Bhutan Army to disturb the Republic Day celebrations. Photo: Ritu Raj Konwar