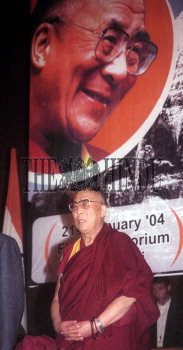 Caption : Tibetan spiritual leader, the Dalai Lama, praying at the inauguration of a series of programmes, which began all over India, to observe the year 2004, as `Year of Tibet' in New Delhi, on January 20, 2004. Photo: Sandeep Saxena