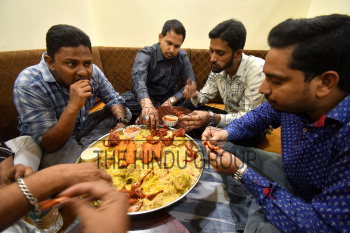 Caption : Several people partake from the same Mandi thaala at the Qasr al Mandi restaurant in Barkas in old city of Hyderabad, which is predominantly populated by descendants of Yemeni soldiers in the Nizam's army, in Hyderabad on February 18, 2020. Photo: Nagara Gopal / The Hindu