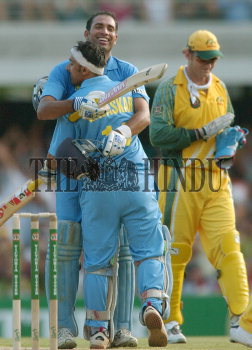 Caption : India's V.V.S. Laxman getting a hug after his century from debutant Rohan Gavaskar, as Australian wicket-keeper Adam Gilchrist applauds in the VB Tri-series match against Australia at the Gabba, Brisbane, on January 18, 2004. Photo: V.V.Krishnan