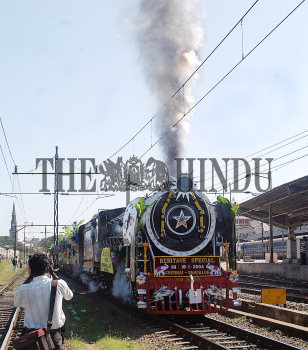 Caption : The 'Heritage Special' train, which was operated by the Southern Railway between Chennai Egmore and Vandalur railway stations, was reconditioned last year at a cost of Rs. 3 lakhs, for this special run along the city metre-gauge line, on January 18, 2004. In 1965, the 'Tata Engineering and Locomotive Company' had built the engine with the number YG-3358. It was primarly used for goods operation in the Madurai Division and also for hauling passenger trains. Nine years ago, this train, known as the 'black beauty', was retired from service. The 1200 horsepower engine, has a space to store 9.5 tonnes of coal with a water tank capacity of 13,640 litres, and can haul 850 metric tonnes of load at a maximum speed of 65 km per hour. Photo: R. Ragu