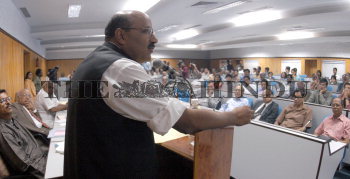 Caption : Shekhar Gupta, editor-in-chief, 'The Indian Express', addressing the gathering at a seminar on "Freedom of the Press and Legislative Privilege" organised by The Indian Newspaper Society and Media Development Foundation and supported by The Madras Union of Journalists, that was held at the Image Conference Facility in Chennai, on January 16, 2004. The others in the picture are: R. Bhagwan Singh (left), president, Madras Union of Journalists, K.T.Thomas, retired judge of the Supreme Court, and M.P.Veerendrakumar (extreme right), president, INS. Photo: V. Ganesan