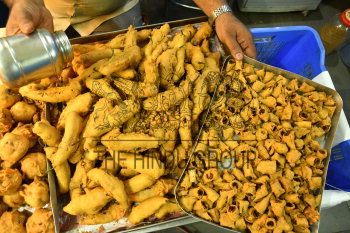 Caption : Piping hot mirch bajji and cut mirch, two Hyderabadi delicacies, ready for serving at Bhaiyya Khara Bhandar at Ameerpet in Hyderabad on November 20, 2019. The city has made it to the list of UNESCO network of creative cities under the ‘Gastronomy’ section. Photo: Nagara Gopal / The Hindu