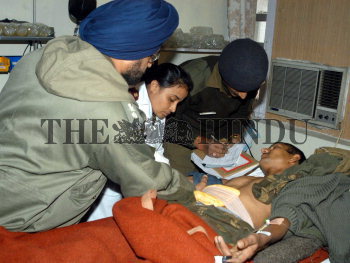 Caption : A WOUNDED army soldier being treated at the Badamibagh Hospital in Srinagar on January 12, 2004. The soldier was WOUNDED during a gunbattle with militants in North Kashmir on January 11, 2004. According to army officials, there is a 50% decrease in casualities, since India and Pakistan announced ceasefire. Photo: Nissar Ahmad