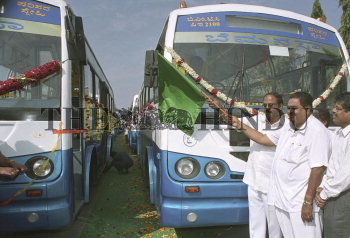 Caption : The new BMTC vehicle with Euro-II standard, named as 'Parisara vahini 2004' was launched in Bangalore, on January 09, 2004. The buses were flagged off by the Transport Minister, Ramanath Rai, and KSRTC