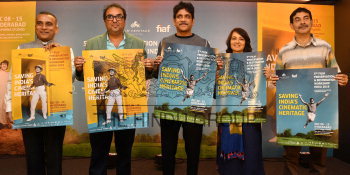 Caption : Group CEO and MD of Viacom18, Sudhanshu Vats, Founder of Film Heritage Foundation Shivendra Singh Dungarpur, Actor-producer Akkineni Nagarjuna, Animal rights activist and actress Amala Akkineni and Principal Secretary, IT and Industries Jayesh Ranjan announce the opening of applications for the Film Preservation and Restoration Workshop 2016 to be held in December-2019 at Annapurna Studios, Hyderabad on August 20, 2019. The workshop will teach participants to restore and preserve old films and photography material. The workshop is conducted by Film Heritage Foundation with Martin Scorer's The Film Foundation. Photo: Nagara Gopal / The Hindu