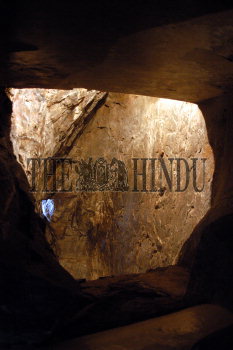 Caption : Picture of the cave in the St.Thomas church in the Little Mount, Chennai. Legend has it that it was in this cave on the Little Mount, that Thomas had lived while in Madras, and . over which, the Portuguese had built the Blessed Sacrament Chapel in 1551. In the east wall of the cave is an opening, now barred and by it a palm print. The belief is that it was through this `window' that Thomas had fled to El Grande Monti, where he was martyred. The cave can be entered by squeezing oneself through an opening by the side of the ornate altar of the ancient chapel. Inside the cave, is an altar where the faithful light their candles. It is believed that the cross on the outside of the rear wall of the cave had been cut by Thomas.. Photo: V. Ganesan 03-01-2004