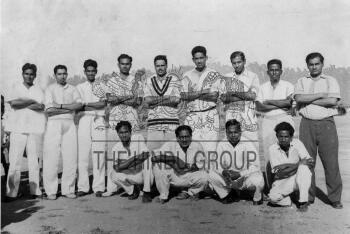 Caption : The Parry's Cricket Club who retained the Sport and Pastime trophy beating T.V.S. Recreation Club A by five wickets in the final of the tournament conducted by the Madras Cricket Association on the Marina ground at Madras on March 22, 1962. Standing with the sweater on is A.G. Kripal Singh, skipper of the team. To his left is Mohan Rai and to his right is M.K. Murugesh, whose fine bowling contributed in, no small measure to the success of the team. (Published in The Hindu on April 24, 1962) PHOTO: THE HINDU ARCHIVES