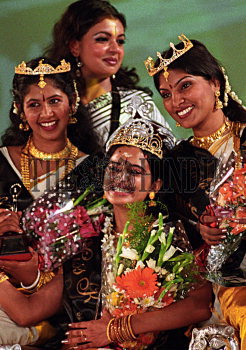 Caption : The Elora Miss Kerala 2003, Reshma George, with the first and second runners-up, Aparna Menon (right) and Shravana (left), at the Miss Kerala beauty pageant in Kochi on December 31, 2003. Standing behind is Ranjini Menon, the last year's Miss Kerala. Reshma George, a second-year engineering student of the Rajagiri College of Engineering, Kalamassery, was crowned the Elora Miss Kerala 2003. She also won the titles of Miss Beautiful Hair and Miss Talented. A Bharatanatyam dancer and daughter of Lancy and Chitra George, Reshma beat 18 other contestants who had made it to the finals of the pageant organised by the Impresario. Photo: Mahesh Harilal