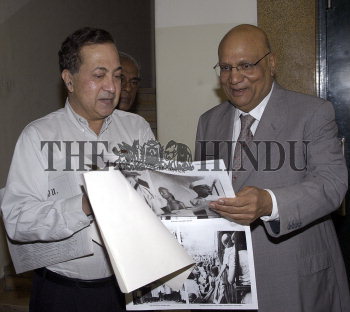 Caption : Lord Swraj Paul, the Indian born business magnate from London seen with Mr. N. Ram, the Editor-in-Chief, 'The Hindu', at The Hindu corporate office in Chennai on December 31, 2003. Mr. Swraj Paul is shown the special pull-out on Mahatma Gandhi brought by The Hindu on the occasion of its 125th anniversary. Photo: Vino John