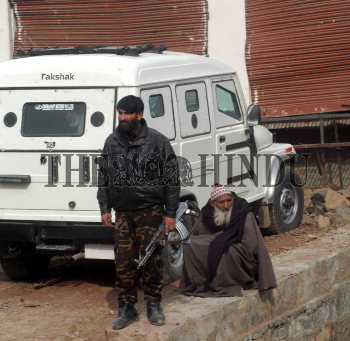 Caption : An army soldier detaining an old Kashmiri for questioning, after an IED blast in Lawaypora village on the Srinagar-Uri national highway, on December 30, 2003. Militants set off an explosion wounding 34 army soldiers, when their bus was hit by the IED blast. The bus, which was part of an army convoy, was on its way to Uri. When the bus reached Lawaypora, militants detonated the mine with a remote control device, throwing the bus several metres away. Photo: Nissar Ahmad