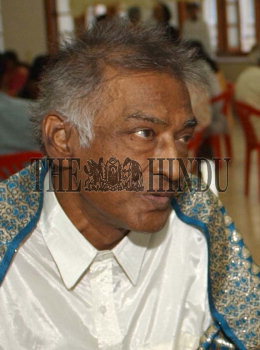 Caption : A file photo of actor Gangadhar. The Kannada film hero of yesteryear, Gangadhar, died on December 27, 2003 after prolonged illness. He was 67 and is survived by his wife, a daughter and a son. Gangadhar, who acted in over 80 films, was introduced to the tinsel world by the late film director, Putanna KANAGAL, in "Gejje Pooje", which was based on M.K. Indira's novel which dealt with the problems of prostitutes. Among Gangadhar's important films were Sharapanjara, Nanna Tamma, Bhale Adrushtavo Adrushta and Aliya - Geleya. He won several awards including the Rajyotsva award. Photo: V. Sreenivasa Murthy