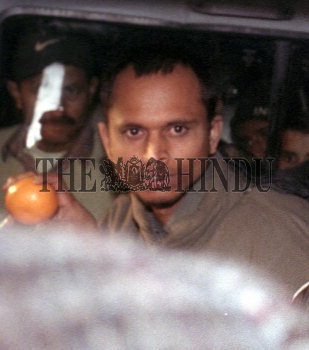 Caption : Murali, one of the Indian workers who was abducted in Afghanistan, on arrival at the IGI airport in New Delhi on December 28, 2003. Working for the BSC-CNC group in Afghanistan, G. Varadayya and P. Murali were abducted by unknown persons on December 6th, when they had gone shopping in the southern Kabul province. Subsequently, the Taliban spokesperson had claimed responsibility for the incident and the release of 55 of its prisoners was sought in return for their release. Photo: S. Arneja