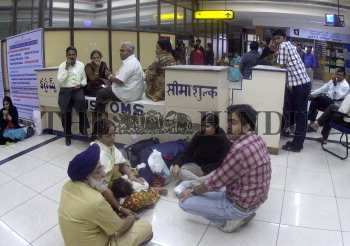 Caption : Restless passengers, STRANDED at the Rajiv Gandhi International airport in Hyderabad, on December 27, 2003, as there was inordinate delay in the commencement of Air India flights, leading to immense hardships. The passengers, who were bound to Chicago and New York via Mumbai on an Air India flight from Hyderabad, had been literally grounded for the last 12 hours at the airport at Begumpet. While airport officials attributed the problem to long delays and flight schedules going haywire, airline officials were not available for comment. Photo: H. Satish