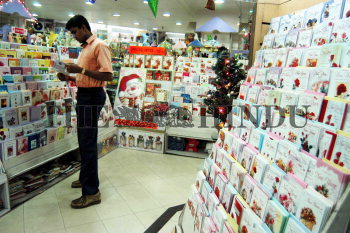 Caption : Sale of greeting CARDS show a decline ever since the arrival of cell phones with more and more services such as SMS both in land and mobile phones and e-mail. In Kerala, the drop is estimated at 30 per cent. During the Christmas and new year season alone around 1 million CARDS are sold in the State. CARDS with prices ranging between Rs 3 and Rs 250 are in the market, but the number of takers has declined. Photo: K.K. Mustafah