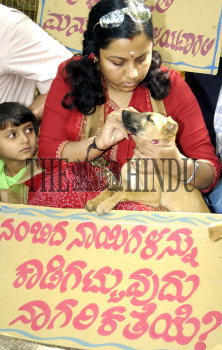 Caption : Film actress Tara staged a demonstration near the Chief Minister's house in Bangalore, protesting against the practice of leaving street dogs into the forest. This decision was taken by Hubli Mahanagara Palike in Bangalore on December 23, 2003. Photo: K. Bhagya Prakash