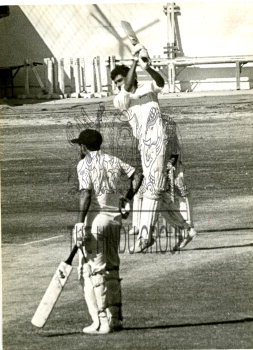 RAVI SHASTRI HITTING SIX SIXES IN A OVER

Caption : Ravi Shastri of Bombay batsman seen in action hits one of the six sixers off the bowling of Tilak Raj of Baroda scored an unbeaten 200 runs in the second innings during the Ranji Trophy West Zone League Cricket Tournament match between Bombay and Baroda at Wankhede Stadium, Bombay from January 08 to 10, 1985. Ravi Shastri equalled the world record of six sixes hit by Gary Sobers of West Indies. (Report Published in The Hindu on January 13, 1985) PHOTO: THE HINDU ARCHIVES