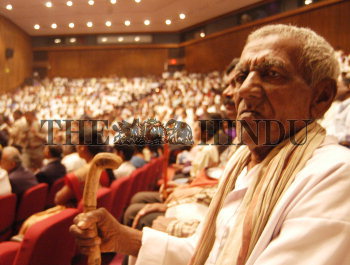 Caption : Ex-servicemen at the "Ex-servicemen Rally 2003" held at the Indian Institute of Science in Bangalore on December 22, 2003, organised by the department of 'Sainik welfare and resettlement', the government of Karnataka. More than 1,000 ex-servicemen and war widows participated in the rally. The Chief Minister of Karnataka, Mr. S.M. Krishna, urged the still physically strong ex-servicemen to join the task force and help nab the forest brigand Veerappan. Photo: G.R.N. Somashekar